BOSTON — As midnight approaches on New Year’s Eve, when much of the country will be glued to the broadcasts from Times Square, Anthony Amore will be waiting for his phone to ring.

He is no lovelorn teen: Mr. Amore, director of security at the Isabella Stewart Gardner Museum, is a detective of sorts on the trail of the world’s largest unsolved art heist, in which thieves purloined 13 items, valued at half a billion dollars, from the museum in 1990. They stole works by Rembrandt, Vermeer, Degas and others.

The museum is offering a head-spinning reward of $10 million for information leading to their recovery, an amount it says is the largest private reward ever offered for stolen property. The offer expires on Jan. 1, when it reverts to $5 million. 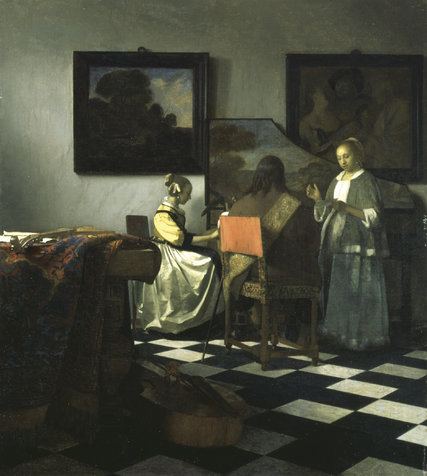 Vermeer’s painting “The Concert,” which was stolen from the Gardner in 1990.

“It’s conceivable that some criminal organization or people might be wishy-washy about the $5 million,” Mr. Amore said the other day as he sat in his cramped office at the museum, surrounded by copies of the stolen works. “But it’s not conceivable that they’re feeling the same way about the $10 million.”

The magnitude of the Gardner heist, and the fact that it remains unsolved, is an open wound for Bostonians, many of whom have a soft spot for the museum and remain enthralled by the enduring mystery behind the theft.

“This is our equivalent of the Lindbergh baby kidnapping, but we’ve never had a satisfactory conclusion to it or any clue about what happened,” said Thomas Whalen, a social scientist at Boston University.

And, he said, the fact that no informant has stepped forward in all these years speaks to a quintessential Boston characteristic — the “closed culture” and tribal nature of its people, especially small-time hoodlums, he said, who would likely confess to a murder before informing on someone.

Mrs. Gardner, an art patron and philanthropist who died in 1924, stipulated in her will that the vast art collection in her home here, modeled on a 15th-century Venetian palace, remain on permanent display exactly as she left it. To comply, six empty gilded frames are on view just as they were the night their contents — five paintings and a Rembrandt etching — were cut out of them. The empty frames serve not only as reminders of the works that are gone; they look like open arms, waiting to welcome them back. 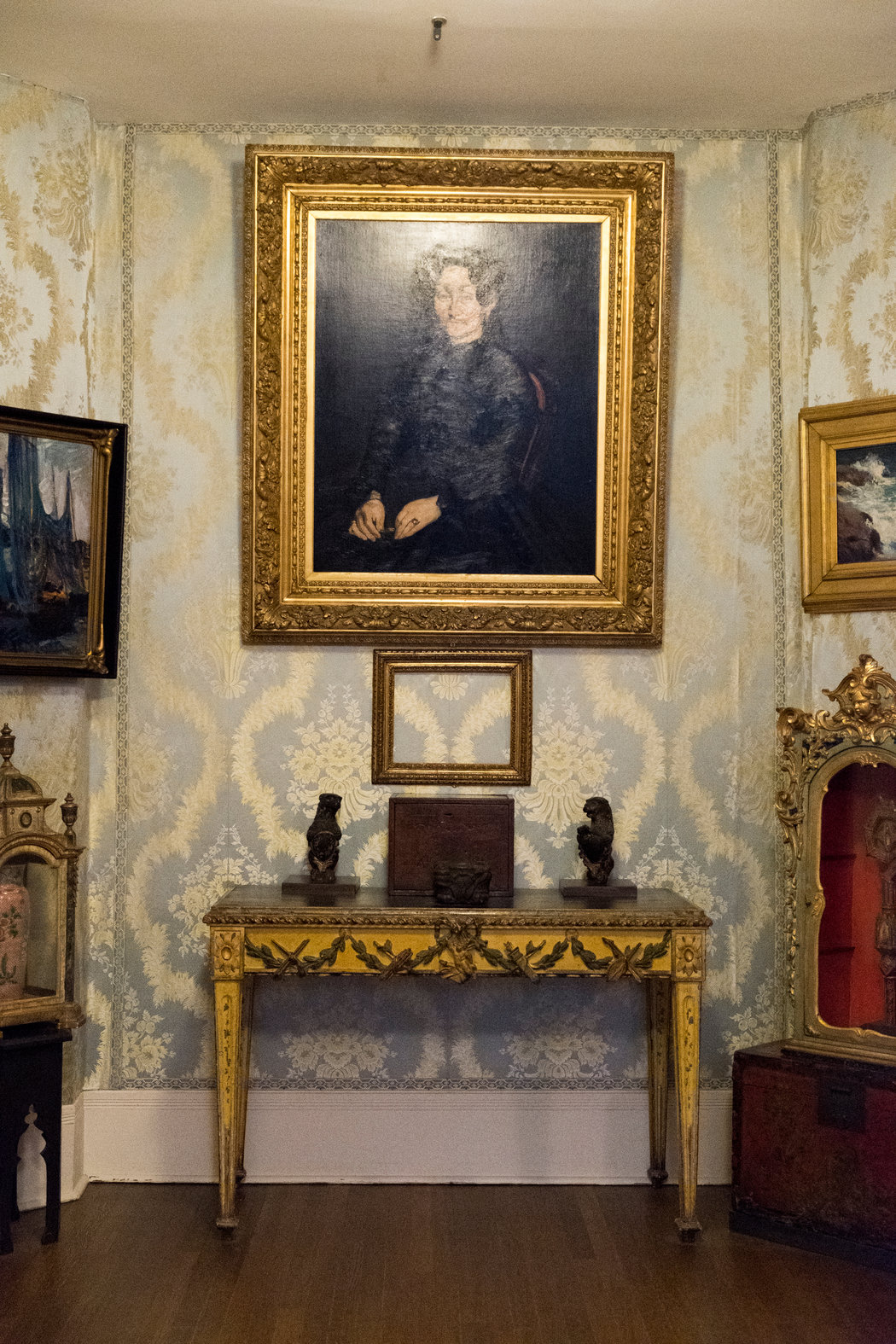 An empty frame that once held Manet’s “Chez Tortoni” hangs in the Blue Room of the Gardner Museum. Above the empty frame of the stolen work is Manet’s portrait of his mother, “Madame Auguste Manet.” CreditM. Scott Brauer for The New York Times

The museum doubled the longstanding reward to $10 million in May to underscore its determination to recover the art and set a “limited time only” offer as an added incentive. Since then, dozens of tipsters have called Mr. Amore — most with unsubstantiated theories.

As if on cue during the interview, Mr. Amore’s phone rang. It was a man who calls so often with outlandish claims that Mr. Amore has affixed a Post-it note to his phone reminding him not to answer calls from that number.

But a few callers have been credible and have helped fill in some blanks, he said, declining to be specific. Although he is no closer to locating the missing works, he said, he feels closer to understanding where they have been.

“I have a better picture of what happened, where they moved, perhaps,” he said, “but not a better sense of where they are right now.”

No one has ever been charged in connection with the brazen theft, carried out just after midnight on March 18, 1990. Two thieves gained entry to the museum by posing as police officers and left after 81 minutes with the 13 objects.

The statute of limitations on the theft ran out in 1995. Still, the F.B.I. and federal prosecutors have joined the museum in what they say is an active, ongoing investigation.

The F.B.I. announced in 2013 that it knew the identities of the Gardner thieves but did not reveal their names, and later said they were dead. The bureau said they belonged to a criminal organization based in New England and the Mid-Atlantic and that it had traced the paintings to Connecticut and Philadelphia, but those trails had grown cold.

Authorities have been playing cat and mouse for years with a Connecticut man, Robert V. Gentile, 81, a reputed member of the mob, whom they believe to be the last living person who might know where the objects are. His lawyer has said he does not.

“The investigation has had many twists and turns, promising leads and dead ends,” said Kristen M. Setera, a spokeswoman for the bureau’s Boston office. “There is no part of the world the F.B.I. has not scoured following up on credible leads.”

The focus now, Mr. Amore said, is on the network in which the thieves operated — a complicated task, he said, “because these sorts of people live complicated lives with mistresses and girlfriends, ex-wives, kids, illegitimate kids, friends and enemies.”

In most art thefts, he said, stolen works turn up either immediately or a generation later, and he is hoping that by now, potential informants _ a jilted lover, an estranged child — might feel safer stepping forward, especially with a huge reward in the offing.

All tips and leads go into an elaborate database that Mr. Amore, 50, a former Homeland Security official who helped overhaul security at Boston’s Logan International Airport after the Sept. 11 attacks, has created during his 12 years at the Gardner. It has 30,000 elements, including names, addresses, phone numbers and license plates.

“If someone called in to say that the guy who had the paintings drove a blue Taurus, I could see who had a blue Taurus,” he said.

In pursuit of information for the database, Mr. Amore scanned old microfiches of Boston newspapers for crimes committed by people wearing police uniforms. He combed through the museum’s handwritten ledger of visitors and contractors dating from the 1980s to see who had come and gone. And he built a timeline that starts before the heist with people of interest.

He has also re-created the night of the crime. He and Geoff Kelly, the lead F.B.I. agent on the Gardner case, have retraced the thieves’ steps at the time of the heist.

His own best guess is that the paintings are somewhere within a 60-mile radius of Boston, he said, because most recognizable stolen art is found close to home. “Thieves quickly learn that they can’t fence these items, so there’s no point in moving them,” he said.

Among the many hurdles in solving the mystery today is that few people might recognize the stolen objects, including the most valuable.

“Most law enforcement and prosecutors in Boston don’t know this painting,” Mr. Amore said, staring up at a life-size photograph of “The Concert” that hangs over his desk. One of only three dozen Vermeers, “The Concert,” which has been valued at $300 million, is the most expensive missing painting in the world. Mr. Amore said that the breathtaking $450 million paid last month for Leonardo da Vinci’s “Salvator Mundi,” the highest price ever for a painting sold at auction, raised the relative value of all masterpieces and only enhanced that of “The Concert,” as did the mystique of its disappearance.

The public’s lack of familiarity with the stolen items has prompted the museum, finally, to produce a book about the heist. The book, called “Stolen,” comes out next year.

For his part, Mr. Amore is looking forward to New Year’s Eve. He thinks that anyone credible might wait until the last minute to call.

“I’ve spent more than a decade preparing for any scenario,” he said. “I’m very ready. I’ll go anywhere. I’ll meet with the devil for these paintings.”

Please note, comments must be approved before they are published